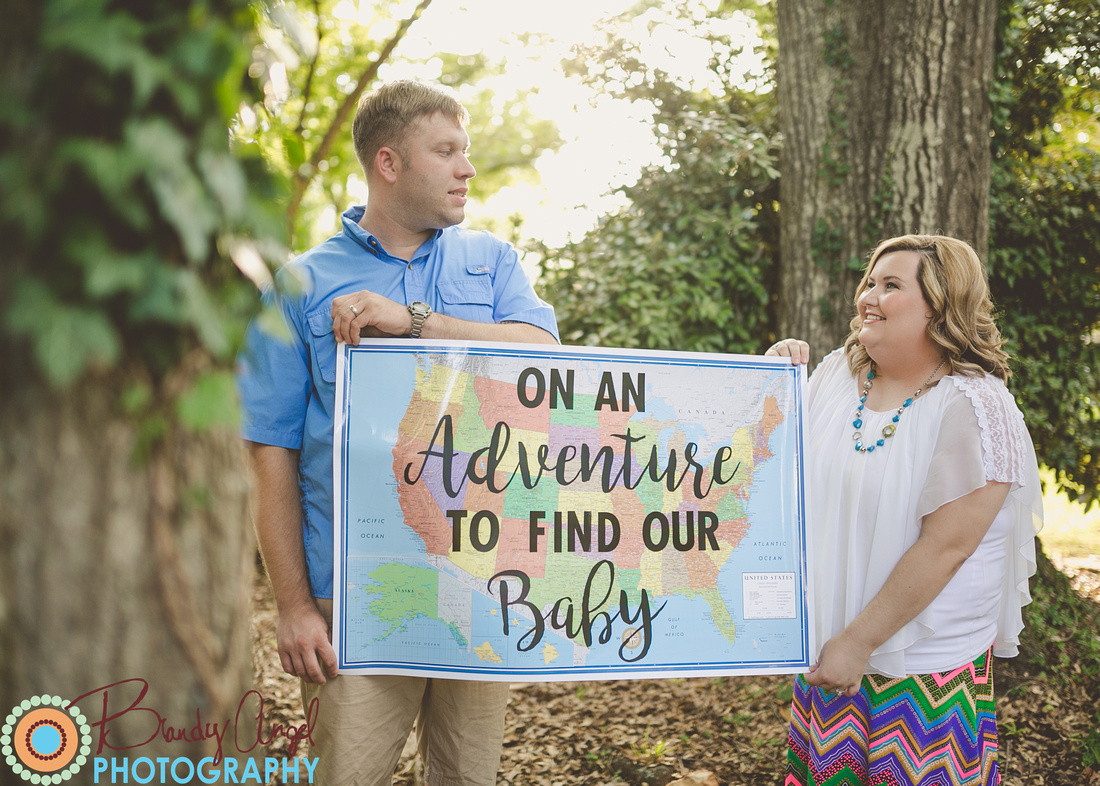 We are Shane and Ashley Stancill and we are currently searching for “OUR” baby! We want to share our story in hopes that someone somewhere will lead us to the baby that God has waiting for us.

After trying to get pregnant for 2-3 years on our own, my husband Shane and I decided we needed to go to a fertility Specialist in Atlanta for help. Our first visit seemed like a typical doctor visit until the doctor wanted to do a physical exam on me. 2 minutes into the exam, the doctor stopped and had a concerned look on his face. I knew from the look on his face meant he saw something that wasn’t supposed to be there. He stopped the exam and he asked us to meet him in his office immediately. He tried to explain that he saw something, but that he didn’t want to insinuate what it could be. The fertility specialist wanted to do a D & C, but because I wasn’t officially his patient yet, he was more comfortable with my regular ObGyn doing the procedure. We called the ObGyn immediately and started discussing when could have the procedure done. After working with the ObGyn and the hospital we decided that January 15th would be the day. We woke up super early and arrived at the outpatient center for Athens Regional. Dr. Goggin came in and said that he was ready and he just knew that they wouldn’t find anything abnormal. I wanted to believe him so bad, but deep down I knew that something wasn’t right. I prayed that God would keep me safe during the surgery and that he would guide the surgeon’s hands. Days went by and I hadn’t heard anything. I tried not to panic, but that was impossible.  Dr. Goggin said he would call as soon as he got the results. I’ve been using him as my ObGyn for about 5 years and when he says something he means it. I knew he would call whether he had good news or bad. Sure enough on January 20th @ around 6:00 pm as I was getting ready to go out to celebrate my 28th birthday, my phone rang. It was Dr. Goggin’s office. My heart sank. This was our conversation.
Goggin: “Hey Ashley. I don’t know how to tell you this. I was packing up for the evening and I saw your results on my desk. Something told me to open them. I did and unfortunately sweetie I don’t have the news I want to have. We found cancer in your uterus and we think it’s stage 3.”

Me: “Are you serious? Will I have to have chemo? Radiation? Will I be okay? Who do I see for this?”

At this point, I started crying and shaking. I was speechless. What do you say during that moment?!? I was angry. I was scared. I was heartbroken. I was devastated. A range of emotions went through my mind.

The first person I called was my daddy. He would make it better. He would know what to do. He always knows what to do. I was crying and screaming by this point. My daddy told me to calm down and that we would fight this. We would beat this cancer. He assured me that we would do whatever we had to do to help me get well again. I got off the phone with him and called my Momma. She told me the same things as he did, but she was scared and I could tell. The third person I called was my best friend Melissa. She was at a basketball game watching Ashlyn, her daughter cheer. She immediately starting reassuring me that everything would be alright. She would find out who the best oncologists were in Georgia. We would fight this together. The next call was to my principal. I knew that I wasn’t in any shape to go to school the next day. How would I tell my students? How would I explain this to them? I didn’t want them to be scared for me. I had to be strong for them. I couldn’t stand in front of their little faces and not bawl thinking about what I had just been told. She told me that I should take the next day off and that if I need the rest of the week off I could take it too. She told me not to worry about lesson plans or school at all, but if you know me, you know that I have a slight case of OCD and I am a control freak, especially when it comes to my students and my classroom. When I have a sub, I like to have everything laid out and organized. As soon as I talked to her I went to the school.  After going to my classroom and getting sub plans together, I meet Melissa and her 3 girls for dinner. I wanted to see them, talk to them and hug them. I needed them. We had dinner and through the tears we talked. The girls were nervous and I could tell. I’ve been a part of their life for as long as I can remember. They are like my own and I would do anything for them. Having to tell them that you have cancer and that you don’t know what you’re going to do is HARD. At this point, stage 3 to me was advanced enough that I might die. I couldn’t bear the thought of not seeing them grow up. I didn’t sleep much that night. I just thought about everything. I googled A LOT that night. Bad idea for anything medical! The next day, Melissa and I with the help of her sister-in-law, started researching the best Oncologists in the state of Georgia. God sent us in the direction of Dr. Boveri. I made an appointment for the following week. Melissa took off work and rode with me. From the time we stepped in the door of his office, there was a calmness that came over me. I felt at ease. I’m not sure if it was Melissa being there with me and making me laugh by using every Snapchat filter on her phone or if God had his hand on me the whole time. Maybe it was both. Before going into his office, I had my mind made up. I am a control freak like that. I wanted the cancer out of my body. Whatever it took to get it out was fine by me.

This was the conversation with Boveri: (Keep in mind: This is the first time I’m meeting him!)

Boveri: We can do a total hysterectomy and we may need to do radiation and chemo. We could also wait to do the hysterectomy. You could harvest your eggs first then do it after that. You go home and think about it first. Then let me know what you want to do.

Me: I already decided. Take it out. I want it ALL out of my body.

Boveri: If we do a hysterectomy, you won’t be able to have kids. You know that right?

Me: Yes, I know this. As far as my eggs, I don’t produce enough to harvest anyways. It would take too long to do that.

Boveri: Well, I’ve never had a patient who comes in and knows what they want like you.

Bless him, y’all! I am his youngest patient EVER and his craziest I am sure! After waiting a week, it was surgery day. I had a total hysterectomy done. The waiting room was filled with my family and friends. I received so many texts, calls and prayers! It was humbling to be honest. All these people were praying for me. They wanted me to be well. Some didn’t even know me and wanted to send their prayers to me. I had the best nurses at the hospital! We made friends with them all. The day after surgery, I convinced the nurses and Dr. Boveri that it was time for me to come home. Before I came home, Shane had super cleaned the house and had everything ready for me. In the coming days, we had lots of visitors to keep me company. Every day in the mail I received cards, gifts and letters. Some from people I didn’t even know. They were still praying for me. I was still in shock that so many people cared. Our friends and family brought us meals, so that we wouldn’t have to cook. Shane got a little spoiled during this time. I never cook as well as everyone who brought us meals! After 2 ½ weeks and lots of hesitation from my coworkers and principal I was back at work. People thought I was crazy. Call me crazy, but I LOVE MY JOB! I LOVE my students! God called me to be a teacher and I will always be thankful that he did! When I was out, my students and their parents sent me well wishes and prayers. They missed me and I missed them so bad! One student even painted me a sign that said, “My Teacher Is My Hero!” It has hung in my house ever since. I read it EVERYDAY and think about how blessed I am. I survived. I beat cancer. I didn’t let it define me. It hurt me, most definitely, and it took away the title that I so long to be called, “Mom”, but someday when I look back, I will be able to say that it made me stronger. Cancer took my ability to have biological children away, BUT it will NEVER take the love and longing I have in my heart to be called, “Mom”.

…..Well that was supposed to be a short intro, but I got a little long winded. This is our story. I hope that you will join us on our adventure to find OUR baby!